My Son Gave Me Some Minor League Cards

At our last card show in December, as we were leaving on the final day, one of the few vendors remaining gave my son a box of minor league cards from the early 90s.

Chris and I weren't expecting much, as many of the packs had been busted.  Several had been opened, so I figured that whomever had the box got the card they wanted out of the box and left the rest to anyone who took it.  I was surprised at some of the cards that Chris and I pulled. 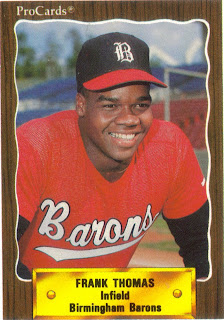 The card that I thought would definitely be gone was, in fact, in one of the unopened packs.  Here, you see a minor league card of Big Hurt.  Frank Thomas is a definite Hall of Famer, and pulling this card from a pack was a nice surprise for Chris and I.  Well, more for me, because Chris didn't know who Frank Thomas was. 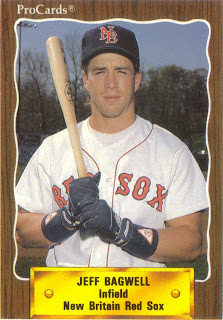 Another good card was this Jeff Bagwell.  Like Frank Thomas, I think it is a matter of time before Bagwell gets into the Hall.  Many people forget that he was once a Red Sox prospect. 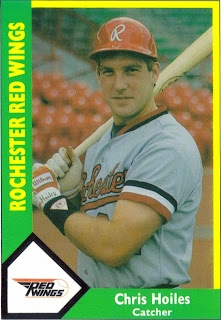 I got a couple Orioles, the highlight being this Chris Hoiles card.  I have met Hoiles on several different occasions and he has always been awesome. 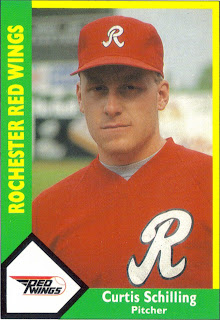 Another former Oriole is Curt Schilling.  Another possible Hall of Famer, too.  I wonder how Schilling's career would have gone if he had remained an Oriole instead of being shipped to the Astros in the ill-fated Glenn Davis trade.  Yuck.

So, I will put these cards aside to one day give back to Chris.  They were a nice product to open a while ago on a rainy Sunday.  He sure enjoyed it.
Posted by William Regenthal at 4:04 PM

That's pretty neat. I don't think I've ever seen a card that showed Jeff Bagwell in any sort of Red Sox uniform before.

Always good seeing the CMC set getting some run.
In case you and your son hadn't checked out my site, The Greatest 21 Days, you might enjoy it. Got posts on two thirds of the CMC set now. Interesting stories on the lesser known guys.

Nice cards. I actually heard Curt Schilling say something I didn't think was insane on the baseball today podcast when he said Bagwell should have been a 1st ballot HOFer, and essentially the writers are full of sh*t for making up these phanthom allegations of PED use.