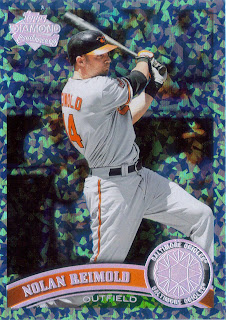 Recently, I got on Ebay and decided to try to get all of the 2011 Topps parallels of Nolan Reimold.  I was successful in getting all of them with the exception of some of the 1/1s (Canary Diamond, printing plate, etc).  I had already had his 2011 Topps base card and his Cognac parallel, so I needed to knock off the Hope Diamond, Diamond, Wal Mart Blue, Target Red, Gold and Black parallels.  My favorite so far is the above Hope Diamond.  I think those cards looks really nice with the blue hue to the diamond concept. 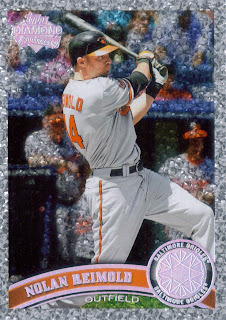 The regular diamond parallels look nice, as always.  All of Nolan's 2011 Topps came out of Topps Update. 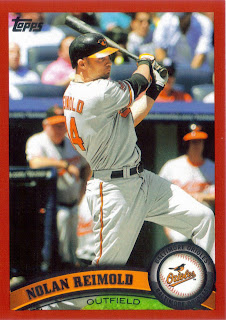 I like the red Target parallel and blue Wal Mart parallel.  They are a nice addition to retail blasters.  I'm glad they did something other than the black Wal Mart parallel this year because they were a little hard to tell apart from the regular black parallels. 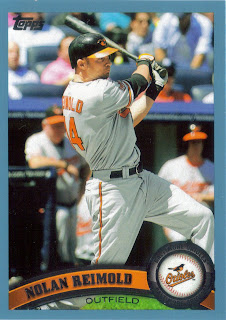 The black parallels are always nice.  I usually do pretty well in pulling black parallels from my boxes.  I have several of some decent stars for sale in my booth at the card shows. 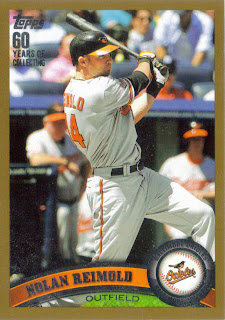 You can't go wrong with Topps Gold.  They have had these parallels since 1992.  I always enjoy pulling a gold parallel of an Oriole out of a pack.  I bought this one off of Ebay and a day later got another one in a trade with my buddy Nick.  My good friend Ryan will probably end up with the one that I bought at some point.

So, I will keep a lookout for the Canary Diamond 1/1 and a printing plate of 2011 Topps Nolan Reimold, then I should have all of his 2011 variations.  I highly doubt I will get the Canary, but you never know.  If anyone has it, please let me know!
Posted by William Regenthal at 1:00 PM