Something Cool From Mom

My mom always finds the best stuff.  Recently, a box came in the mail for my son and included with the clothes and stuff for him was this canvas photo of the Winston-Salem Dash's field - BB&T Ballpark. 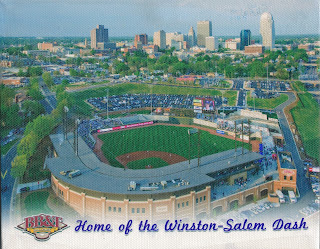 What I like most about the picture is that it shows the skyline of Winston-Salem in the background.  As many of you know, I grew up in Winston-Salem.  I attended the opening weekend of the green glass BB&T building in the background with my brothers and grandfather back in 1987.  My grandpa would always take us to things like that around the city when we were growing up.

The city has had its ups and downs over the years.  Companies like Planters, Nabisco and Wachovia have all vacated the city.  RJ Reynolds Tobacco has had less of a hold on it due to the increasing legislation against 'Big Tobacco.'

After those companies left in the 90s, other companies have come in and helped revitalize the downtown area.  Krispy Kreme has its headquarters close to downtown on Knollwood Street.  The parent company of Texas Pete Hot Sauce is based in Winston-Salem.  Of course, there is also BB&T.  Wake Forest University.  Blue Rhino propane.  Cheerwine.

It isn't the biggest city in North Carolina (it ranks 4th based on population, just a mere 1,300 people more than #5 Durham), but it definitely is one of the state's most historic.

So, I am very glad to share with you the area I once called home and I'm also glad to be able to hang this picture up on my wall.

If you haven't been to a game at BB&T Ballpark, man, you are missing out.  The 2012 Carolina League All Star game will be held there this year.  It is a really awesome new ballpark.

Winston-Salem is the birthplace of former Cub great, Mark Grace.  Hank Aaron also made a stop there in the minor leagues before joining the Braves.

Thanks Mom!
Posted by William Regenthal at 5:04 PM

Very nice. I wouldn't mind being out there in the right field bleachers drinking a nice cold lemonade right about now.