I went to the Kinston card shop today with my wife, son and a friend to kill some time and I left there with a couple really nice 1969 Topps Orioles.  I was having a hard time finding stuff that jumped out at me until I decided to go through the vintage box.  I plan on working on the 1969 set really soon, so anything I could get my hands on was good.  These cards weren't in the best of condition, so I'll probably keep these with my Orioles stuff. 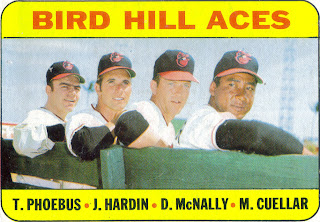 The first card shown is this Bird Hill Aces card.  I like this one because the history of the Orioles franchise has been built on pitching.  Funny thing, though, this card doesn't show the Orioles' true historical ace, Jim Palmer.  He was still young and erratic when this card was released.  Not to worry, though, Palmer would cement himself atop the Orioles rotation for the decade that followed the production of this set. 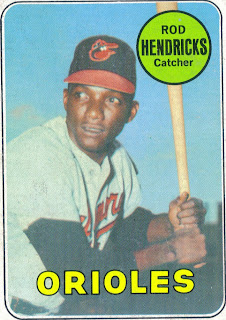 This card is awesome because it is a rookie card of one of the most beloved Orioles of all time, Elrod Hendricks.  Hendricks would spend almost 40 years with the Orioles organization until his death in 2005.  I met him in July of 2005 and got a ball signed by him.  I wish I hadn't gotten it signed in sharpie because it is slowly fading into oblivion.  Hendricks was a great bullpen coach for the Orioles over the years, and really, they should have retired his number 44 back in '05 when he passed. Finally, I got 2 copies of this 1969 Topps 6th series checklist.  It was a Brooks Robinson card that I didn't have in my collection, which I need to tighten up on.  I don't think I have all of his all star or checklist cards, so that is something I need to research and add to my want list.  I like how the colors pop on this card.  It is a really sharp card, with a small stain on the left hand side, near the top.  You can hardly notice it.  The other copy I got has corners that are kind of soft, so that one will go in my Brooks PC and this one will go into my 1969 set.

In all, we enjoyed our trip to the shop, as always.  I almost bought 2 boxes of 1995 Topps to bust because I hadn't started that set, yet.  I held off, though because I spent some big money on Sportlots the other day.  You'll be seeing what I got in the coming days.

Posted by William Regenthal at 7:14 PM

Young and erratic... Sound familiar? Britton, Tillman, Matusz, Hunter, Arrieta. So you're saying these 5 guys will become less erratic and lead us to the promised despite the Angelos crime syndicate's effort to keep us in the cellar? Oh yeah, nice cards too!