I thought I would conclude my post on my 2012 Topps Series One box break by featuring several of the cards in the Series One set that stood out to me. 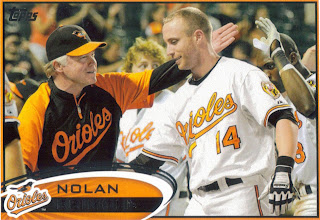 I couldn't pass up a chance by showcasing a new addition to my Nolan Reimold PC.  Here is a good shot of Reimold being congratulated by Buck Showalter.  Those batting gloves on Reimold's hands look awesome and they look familiar.  I doubt they are the same ones that he passed on to me, but wouldn't that be cool if they were? 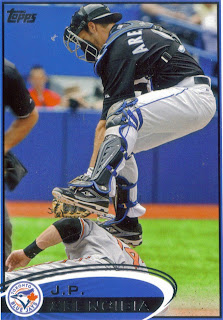 Stealing an idea from Ryan, the next two shots are of Oriole cameos.  This one appears to be Nolan Reimold hopefully scoring a run off of J. P. Arencebia. 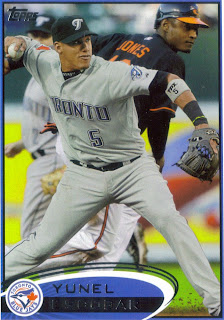 Here is one where you can see Adam Jones in the background.  Hope he was safe on the play... 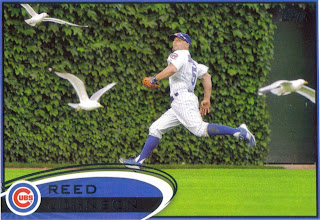 Here is a shot of Reed Johnson in the new reboot of Alfred Hitchcock's The Birds. 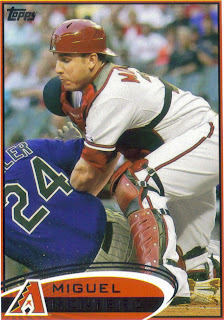 There are a LOT of 'play at the plate' cards in this set.  The above card is actually the first card I pulled from this set out of the very first pack I opened. 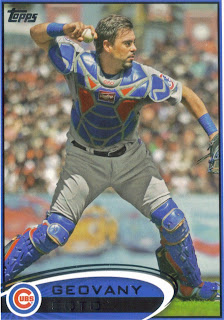 I thought this Geovany Soto card looked really cool.  With all that armor on, I have to wonder if he is an Autobot or a Decepticon... 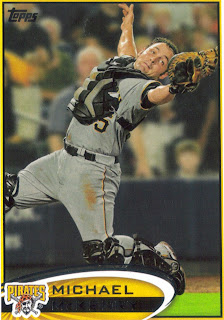 This Michael McHenry is an interesting shot. 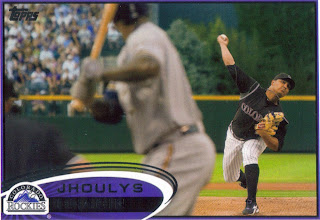 I think this Jhoulys Chacin probably was one of the worst shots I saw.  The perspective is interesting, but most of the card is taken up by the blur that is the guy in the batter's box. 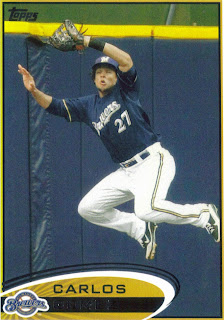 Here is an interesting one of Carlos Gomez making a play with his eyes closed. 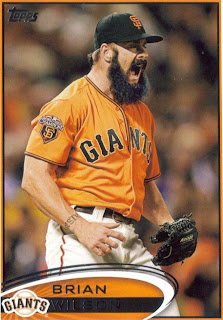 Brian Wilson either recorded an out or is hacking up a furball. 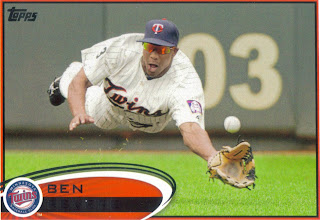 I really like this shot of Ben Revere making a diving catch. 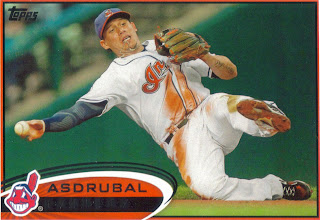 Another of my favorite shots is this one of Asdrubal Cabrera getting ready to throw a runner out. 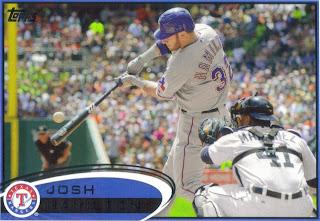 This Josh Hamilton is by far one of the best shots in the set, in my opinion.  I think the photographer did a really good job on this one. 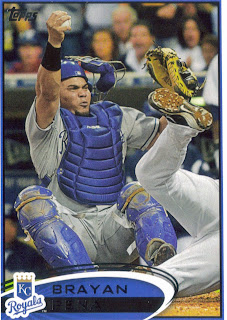 Finally, this is probably one of the best play at the plate cards I've seen.  I know a fellow blogger who will definitely want this one in his collection.

I am really happy with this year's base set.  The design is minimal enough so that the concentration is on the photo.  The photos in this year's set rival those of 2009 Topps, which is probably the best, photo-wise that I can think of (maybe that and 1991).

What do you all think?

I'm loving the base set, it's the best photography I've seen in a long time.

Have you seen the Tom Gorzelanny card from the 2012 set yet? That one is also a neat "play at the plate" card, and it's a pitcher no less.

I'm going to say that those aren't your gloves because Felix Pie is in the background. He was DFA'd on August 23rd/

Nice to see Reed Johnson getting some love via Topps. Glad the Cubs brought him back. Hope he stays healthy.

and i have a duplicate of the frank robinson golden greats insert, if interested...(actually, i think it's the gold standard one)

I've got the Frank Robinson card, Kev, thanks though!