The Sad Story of Doug Million 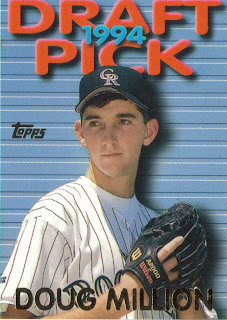 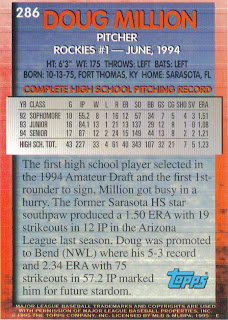 Part of why I love building older sets of Topps cards is seeing some of the players who have come and gone as years have gone by.  Some of the players are household names who achieved greatness while others may have only gotten a cup of coffee in the big leagues only to fade into obscurity.  There are also other players whose talent shone brightly for a brief time, but were lost to us far too soon.  One of those players is Doug Million.

Doug Million was born in 1975 in Kentucky, but rose to fame as a high school left handed pitcher in Sarasota, Florida.  He won the Gatorade High School Baseball Player of the year award in 1994.  According to the above 1995 Topps baseball card, he was 33-4 with a 1.23 ERA in his high school career (WOW!).

He was drafted out of high school by the Colorado Rockies with the seventh overall pick in the 1994 amateur draft.  Million went on to play in 4 minor league seasons with a record of 26-32, 395 strikeouts and an ERA of 4.12.

Million was ranked the #19 prospect in the pre-1995 Baseball America rankings and #69 prospect in the pre 1996 Baseball America rankings.  He struggled to a 5-14 record in 1997 over two teams in high A and AA ball.  The Rockies sent him to instructional league in Mesa, Arizona following the completion of the 1997 minor league season in order to work on some things and try to bounce back.

Million had battled asthma his entire life, but had always managed it.  While in Mesa, on September 23, 1997, he and a roommate had gone to a restaurant to play an electronic trivia game.  Million suffered an asthma attack in the restaurant and passed away at the age of 21 shortly thereafter in the early hours of September 24, 1997.  His death shook the Rockies organization from top to bottom.  Former Rockies manager Don Baylor was quoted in Million's obituary which was printed in September 1997 in the Hastings Star Gazette as saying "I was in shock when I heard it, and I'm still in shock.  Here is a man who will never get the chance to fulfill his boyhood dreams."

I tell this story because sometimes as we thumb through cards in the boxes and albums we have in our closets and attics, we tend to not notice some of those players who we might have never heard of.  Sometimes they just didn't pan out and sometimes, as sad as it is, they don't get the opportunity because their life was taken far too early.  Million passed away to an asthma attack.  Other players have been lost in plane crashes, car accidents and sometimes, yes, even murder.  Hopefully, their memories can live on through others who seemingly stumble upon their baseball cards and take the time to find out who they were.
Posted by William Regenthal at 4:55 PM

that is sad i can't believe what it was like.

How did you run across this guy? You just pick him out and google him?

Pete,
I was reading about former West Forsyth High School/UNCC graduate Erik Walker when I saw something about baseball players that had died at young ages. I saw Doug Million on the list. I had seen one of his cards before that and thought he had a cool name and thought of doing something with He, Brad Penny, Don Money, etc, so his name was fresh in my mind. When I saw that he died, I was like, wow, I didn't know that, and I looked into why and here we are...

Just read your post... thanks for writing it. I grew up with Doug and his little brother Rob in Sarasota. He was absolutely one of the best pitchers at the high school level. Such a tragic death and one that was in a string of tragic deaths that hit the Sarasota High School baseball program in the mid/late 90's. Hopefully Doug's legacy will live on.

I'm going through all my older baseball card sets now referencing Baseball-Reference to check on these guys. Amazed at how many deaths I've never noticed because the information was just a quick blurb somewhere one time and then forgotten to history. Some of the deaths I know some about and others have been unknown until the moment. I knew Mr. Million had died but I never knew what transpired. Thanks for the post. Keep up the work of telling the stories of players who the casual (and even avid fan) have never before read or heard.

Great but sad story. My son just opened a pack of baseball cards in Cooperstown from 1994. He found an autographed card of Doug Million. We looked him up on wiki. Saw he passed in 1997 in Mesa, which is 5 min from where we live. In this big world it can get small real quick. My son bought a nice case for it and it is safe. RIP