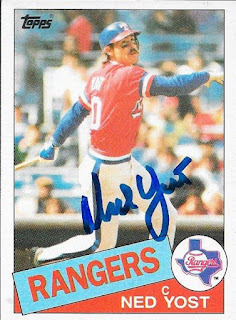 I got a nice TTM back from the manager of the Royals recently.  Ned Yost actually signed three of this 1985 Topps, even though I only sent two.  The card looks really cool; I like how the uniform matches up with the borders on the card.  Yost's choice of a blue Sharpie helps compliment the card, I think.

I mailed to Yost on February 20 at Royals Spring Training and got the cards back on February 27, for a 7-day TAT.  I have already given one of the extra 1985 Topps to a friend of mine, and plan on doing something with the other one soon.
Posted by William Regenthal at 6:02 PM