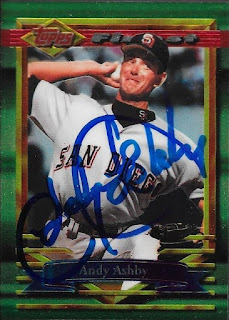 This was a pretty nice success from former pitcher, Andy Ashby.  I saw that he signed, so I grabbed a few cards of him and sent them along.   He wasn't someone who signed a lot of cards, so I sent four cards and hoped for the best.  I got two of the cards back signed, and they turned out really well.  I can't complain at all.  The above 1994 Finest turned out great, as everything I send out like Chrome and Finest, gets the baby powder treatment and it really works wonders.  I really like this set and want to add a few more to the album. 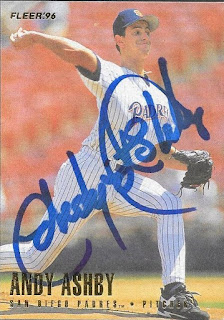 I also really enjoy 1996 Fleer.  Chris and I busted a box of it, and I was able to get a few of them signed.  This one really looks nice, and even better in person.  I need to go through the others that I have and get a few more ready to send out.

I mailed to Ashby on November 9 and got the cards back on February 21, for a 104-day TAT.
Posted by William Regenthal at 8:55 PM