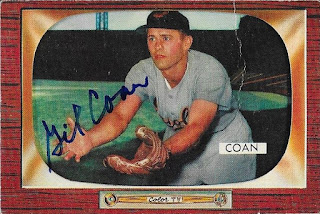 I've said before how I try not to seek additional TTM successes from players.  I usually don't, unless I sent them a ball in the past and now want a few cards, or if I had paid for a signature.  If I pay a fee, I see it as they are selling something, and I feel much better about asking for additional items.  I have, however, sent to a few guys for the specific purpose of having a certain type of card signed if I didn't have it before.  Gil Coan is one example.  When I originally received from Coan, I got a 1953 Topps signed for the Topps Autograph Project.  That post can be read here.  This time around, I wanted to make sure I had an Oriole autograph on a 1955 Bowman.  I'm trying to add more former Orioles to my collection, and I thought Coan would be a good representative on a 55 Bowman.  So, I bought the Bowman card (off of EBay) and sent it off.  It turned out nicely, I think.  I still am interested in completing this set sometime (unsigned, of course).

I mailed to Coan on February 10 and got the card back on February 16, for a 6-day TAT.
Posted by William Regenthal at 5:28 PM