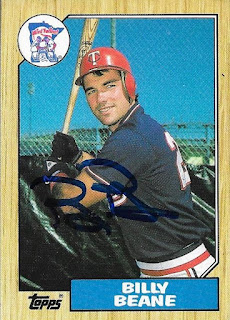 Although I got him TTM on a ball before, I wanted to send a card to A's executive, Billy Beane.  I figured I would add him on the 1987 Topps since I have so many of them signed already.  I have 39 of them in my albums so far.

I mailed to Beane on January 26 and got the card back on February 3, for an 8-day TAT.
Posted by William Regenthal at 6:18 AM