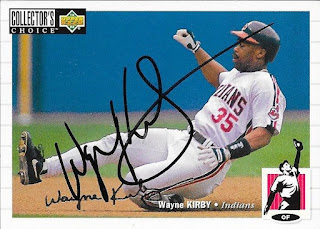 I added another Orioles Spring Training success with these cards from Wayne Kirby.  He is the Orioles first base coach and outfield instructor.  He helps align the OF during the game, among other duties.  He's also really close with Adam Jones; during games, you can see them communicating back and forth, usually with a bunch of laughter in between. 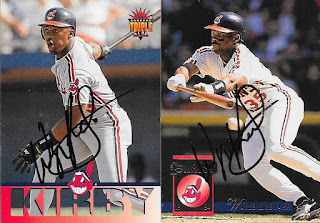 I sent Kirby five cards, but he kept my 1995 Topps, the one I wanted to get back the most.  It is one of those multi exposure cards, and would have looked really cool signed.  Oh well.  I did get some mid-90s stuff signed.  I liked the 1994 Donruss set when it came out. 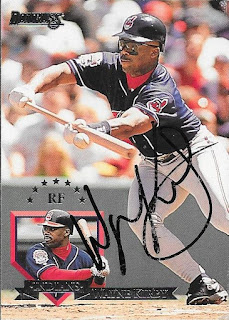 One could get the 1994 and 1995 Donruss sets mixed up pretty easily.  1995 Donruss was one of the first sets I ever put together, so I had to get one of the cards signed.

I mailed to Kirby on February 20 at Orioles Spring Training and got the cards back on March 4, for a 12-day TAT.
Posted by William Regenthal at 11:18 PM