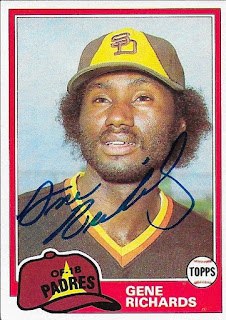 I added some early 1980s cards to my autograph album with these cards from former Padre, Gene Richards.  These cards are really cool because of the old Padres brown and yellow uniforms.  Also, Richards's hair is pretty awesome. 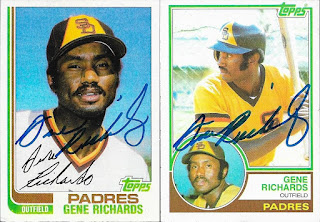 Those are some pretty bad uniforms, but that's the way it was back then, I guess.  Still, the cards turned out great, which I am happy about.

I mailed to Richards on January 12 and got the cards back on February 25, for a 44-day TAT.
Posted by William Regenthal at 6:40 PM