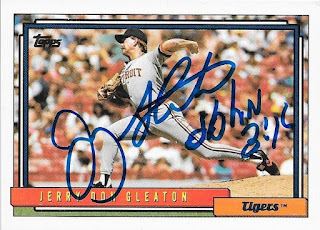 Jerry Don Gleaton is one of those players who's cards always popped up whenever I opened packs way back when I first got into collecting.  We, as collectors, all have those players who we all remember seeing in packs.  Gleaton, Jerry Reuss, Oil Can Boyd, etc.  They all seemed to pop up.  I was able to take some of those Gleaton cards and add them to the album recently with this TTM success.

The above 1992 Topps turned out the best of all, I think.  A nice action shot on a horizontal card, I really like this one. 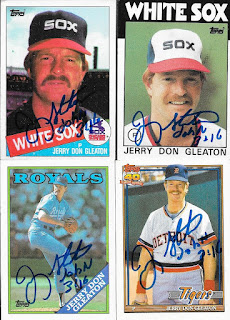 I obviously had plenty of cards to choose from when I mailed to Gleaton, but had to narrow it down to just a few.  I kept it to Topps for this request, and since I couldn't find his 1987 Topps for whatever reason, that made it so that another year was sent.  Had I had an 87, I probably would have removed the 1985 from consideration, I guess.  The color is off on that one, for some reason, leaving Gleaton's face red. 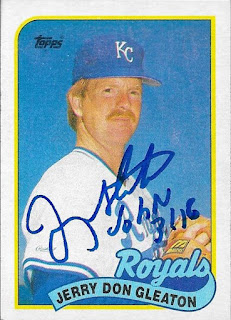 Finally, here is the 1989 that I sent.  I liked this one, too, with all of the blue on the card.  1989 is one of my favorite Topps sets, and I really need to pull more cards out of my box to send off.

I mailed to Gleaton on February 13 and got the cards back on February 25, for a 12-day TAT.
Posted by William Regenthal at 5:40 PM