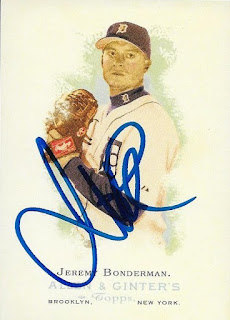 I've been trying to mix some more recent cards into my TTM requests, and this success from Jeremy Bonderman adds a few nice ones to the album.

I loved Allen & Ginter when it first came out in 2006, so having a card from that set represented in the album was a must. 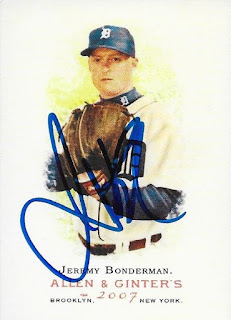 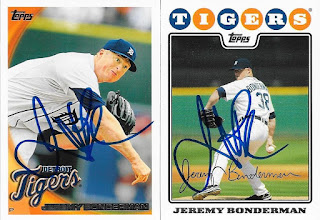 I also needed a few recent Topps, so I sent off the 2010 and 2008 shown above.  I have a ton of 2010 Topps, I just need to sort it, and pull guys that sign.  I think we are far enough removed from that set to have some retired players who sign pretty regularly now.  When it comes to a point where I am struggling to find TTM subjects, maybe I will work a bit harder on sorting the 2010s.  Until then, I have plenty to keep me busy, and definitely plenty to keep me blogging.

I mailed to Bonderman on February 23 and got the cards back on March 4, for a 9-day TAT.
Posted by William Regenthal at 5:54 PM