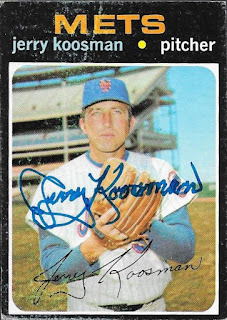 While it might have been fun to send out Jerry Koosman's rookie card for a TTM signature, I'm not that crazy.  Known as "the other guy from the 1968 Topps Nolan Ryan Rookie", I was pretty excited to get back the two cards I did send out.  I had been sitting on this 1971 Topps to send to him for quite a while, but since Koosman charged $10/card, I waited a while.  I finally got around to sending, and had several cards set aside to choose from.  In the end, I chose this 1971 so I would have another one of them in the album.  I had a lot of other Topps years to choose from, but they were a little more populated in the album. 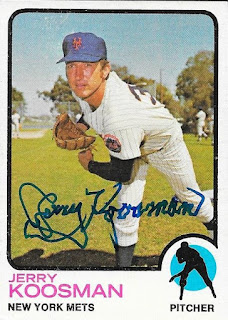 I actually subbed this 1973 into the request ahead of the other cards I had put aside because this one came out of an album of cards that my mom found for me.  Someone marked the album "Hall of Fame" and had pages and pages of cards of guys who actually were Hall of Famers.  They also had a few pages of guys who were probably pretty big at the time the album was put together, but not in the Hall.  The latest series of cards in the album seems to be 1987, so that album could very well be that old.  It makes sense based on the guys that are in there.  I don't have many 1973 cards that I've been able to get signed, but the ones I do have are pretty nice.  This one fits the bill as well.