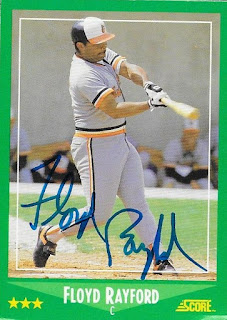 I added another Oriole to my list of TTM successes with this return from former catcher, Floyd Rayford.  I had a lot of his cards to choose from, which was nice.  The above 1988 Score is a good one, which pops nicely on my scan. 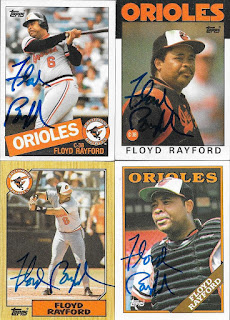 I got a nice Topps run signed, from 1985 to 1988, which is pretty cool.  Usually, when I put the cards in the envelope, I'm just picking ones that look cool, or Topps years that I want to boost in my count, but in this case, it ended up being the four consecutive years.  Of the four, though, I liked the 1988 the best.  I like the old chest protector.

I mailed to Rayford on February 6 and got the cards back on February 24, for an 18-day TAT.
Posted by William Regenthal at 11:26 PM