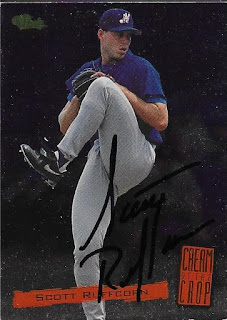 Here is a TTM success from another one of those players who hung around my "to be TTMed" box for a long time before I finally got around to mailing the cards.  I had four cards of Scott Ruffcorn, and sent them all, but he kept one of them.  The card he kept was a 1994 Upper Deck Predictor, which would have looked really nice.  Oh well.  This 1994 Classic Cream of the Crop looks really nice in person.  I used to have a ton of these, but for some reason they are all gone.  I believe this one came from one of those Target boxes of assorted cards. 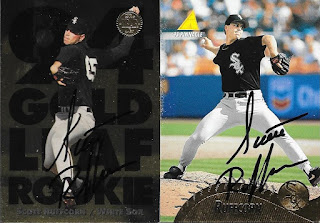 These two cards also turned out nice.  The Gold Leaf Rookie looks a lot nicer in person.  Like the 1994 Classic, it didn't scan all that great.  Oh well, it'll look great in my album anyway.

I mailed to Ruffcorn on January 27 and got the cards back on February 16, for a 20-day TAT.
Posted by William Regenthal at 6:58 PM