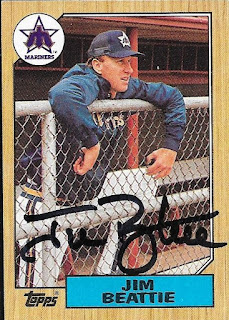 I was able to add some autographs of former Orioles general manager, Jim Beattie on some older Topps cards.  The above 1987 was pretty cool, I thought.  Check out that old Mariners logo. 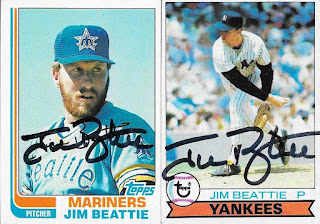 Speaking of old Mariners logos, it is really prominent, with the old jersey, on the 1982 Topps on the left.  You also get an example of Beattie as a Yankee on the 1979 Topps.

Beattie was the Orioles co-general manager with Mike Flanagan from 2003 to 2005 after serving as the Expos general manager from 1995 to 2001.  His time as co-GM of the Orioles was during some pretty dark times in the O's organization.  While their troubles weren't solely his fault, his time as O's GM wasn't very remarkable.

I mailed to Beattie on February 6 and got the cards back on February 18, for a 12-day TAT.
Posted by William Regenthal at 6:23 PM