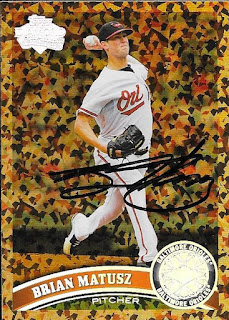 I got some really cool cards signed by former Oriole, Brian Matusz.  The cards have been well-traveled, first being shipped to Max in Chicago for when Matusz was briefly a Cub, then back here once he left the Cubs.  I had several that I would have really enjoyed seeing signed, but the above 2011 Topps Cognac parallel was the one that I really wanted to get back.  I love this card.  It scanned so well, also. 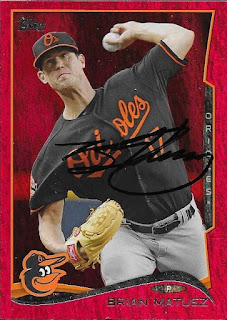 This 2014 Topps red hot foil parallel also looks really nice.  I almost didn't send it, since I was sending the '11 cognac, but I figured why not.  I like how these recent Topps foil cards look when signed.  There will probably be some more sent out sometime soon. 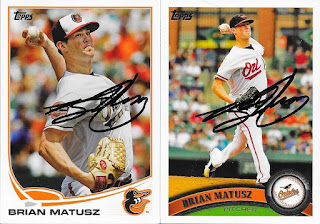 I got a few Topps base cards signed, as well.  I don't have very many signed 2011 or 2013 Topps yet, so those were easy decisions to send. 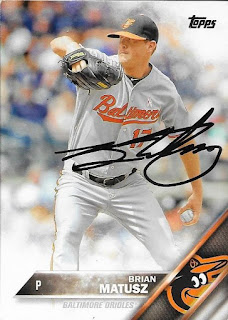 Finally, here is Matusz's last O's card, a 2016 Topps.  His time in Baltimore wasn't as good as any O's fan would have hoped.  He did do great against David Ortiz on multiple occasions, but in the end, he will be remembered as a bust #1 draft pick.

Matusz (b. 1987) has played in the majors from 2009 to 2016 for the Orioles and Cubs.  He was signed to a minor league contract by the Diamondbacks this winter.  He has a career record of 27-41 with a 4.92 ERA and 462 strike outs.  He was the 4th overall pick in the 2008 Amateur Draft by the Orioles and was projected to be a top of the rotation starter.  He never lived up to that potential, many times getting in his own way mentally.  He was one of those Orioles pitchers that may have benefited from a change of scenery, but got blown up in his only game with the Cubs.  He pitched 3 innings and allowed six earned runs for them last season.

I mailed to Matusz at Diamondbacks Spring Training on February 14 and got the cards back on February 25, for an 11-day TAT.
Posted by William Regenthal at 8:14 AM