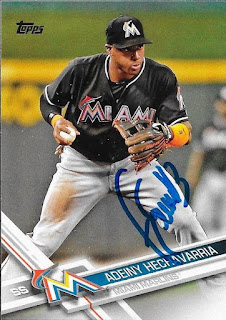 While most everyone on Instagram who does TTM goes after current players, I focus primarily on older retired players.  Still, I do like to send to current players from time to time.  I mailed to Adeiny Hechavarria when I sent out my first batch of spring training requests, but his address was actually a home address.  I had a few 2017 Topps mixed in with all of the spring training guys, and Hechavarria's is the first 2017 to come back.  I was happy to go ahead and knock off 2017 from my Topps Autograph project.  I know this will be an ongoing thing, knocking off a year when a new set comes out.  Kind of keeps the challenge going, really. 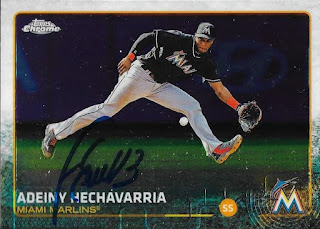 I wanted to include something else, so I thought this 2015 Topps Chrome would look nice, especially since it was a horizontal shot.  I wasn't disappointed at all when it came back.  It was treated with baby powder, and turned out great!

I mailed to Hechavarria on February 8 and got the cards back on February 16, for an 8-day TAT.
Posted by William Regenthal at 12:03 AM