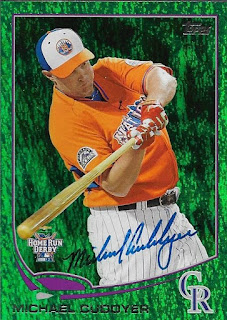 This is one of those TTM successes that really makes you enjoy the hobby.  Michael Cuddyer, early in his career, received some advice for Hall of Famer Harmon Killebrew.  Killebrew taught him the value of having a good signature, and it really shows here.  Add in the fact that I got a nice auto on a 2013 Topps Update emerald parallel, and you have a really nice addition to the album.