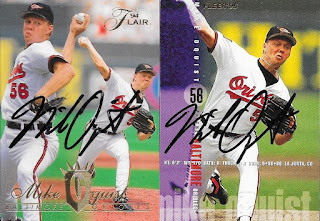 I actually got three cards signed by Mike Oquist, but it was a dual card, and I sent that off to be signed by the other player.  These two will suffice for now.  I was able to get a 1994 Flair and a 1995 Fleer signed by Oquist.  I have always believed that 1995 Fleer was a really freaky design, but they do look great when signed.  You can also never go wrong with Flair.  I would love for Topps or Panini to bring back that design, but I guess Upper Deck still owns the rights to all of Fleer's catalog.  It is still a shame to see how far Fleer fell in the early 2000s.  I still remember when they went under (I'm assuming that all who are reading this know that Fleer owned the Flair brand), but they had spread themselves so thin across the market with what seemed like hundreds of products.  That being said, some of those products had some really nice designs.

I mailed to Oquist on January 27 and got the cards back on February 6, for a 10-day TAT.
Posted by William Regenthal at 9:33 AM