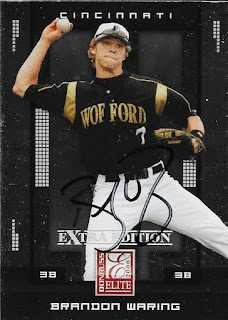 Before I get too deep into this post, I have to acknowledge the amazing Wofford jersey on the above Brandon Waring card.  I should have known it sooner, but there it is, a Wofford jersey on a legit baseball card.  Take it in.  Admire it.  You don't see it often, but there it is.  I didn't go to school at Wofford, in case anyone wasn't sure.  My younger brother did.  When the Orioles traded for Waring, I was pretty excited to have a Wofford alumni in the organization.  I would actually meet Waring a few times and I introduced myself to him, saying that my brother was a senior at Wofford when Waring was a freshman.  Waring actually remembered Adam, which was the best part.  He, then, signed a baseball for him.  I believe Adam still has it, but I know it is faded to crap because I didn't know not to use a China ball at the time.  I keep looking to see if Waring signs TTM, so I can replace the ball, but I haven't seen that he does, yet.  I keep holding out hope.

So, when my friend, Zach messaged me recently about wanting to sell off some of his O's collection to raise money for some family things that had come up, I really was hesitant to part with any money.  He had some nice Chris Davis relics that I thought would look great in the collection, but when he started showing me some of the IP autos that he had picked up, especially the Waring, I jumped on the deal. 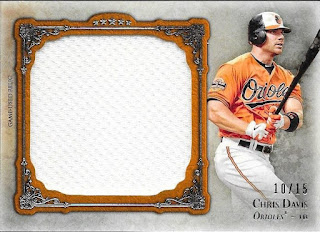 Zach had several Davis relics that he used to keep sweetening the deal.  This 2013 Topps Five Star jumbo relic is only numbered 10/15.  I had one already, but another wouldn't hurt, and at least Zach knows it is in a good home. 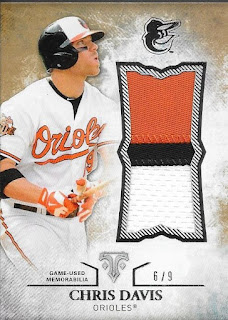 This 2015 Topps Triple Threads three color patch card was pretty sweet.  It is numbered 6/9.  This was the original card Zach showed me, I think, and the deal built from there. 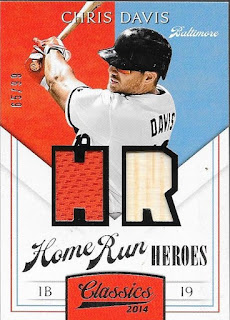 I found one of these Panini Classics at the National a couple years ago, but adding this one didn't hurt.  I believe this was a throw in to the deal.  Zach will correct me, I'm sure. 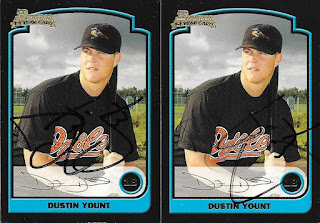 Finally, Zach offered me a multitude of former Oriole prospects to choose from.  I had met Dustin Yount when he was a player/coach for the Chattanooga Lookouts a while back, but got him on a (you guessed it) China ball.  That ball is in a cabinet somewhere probably fading into nothingness. 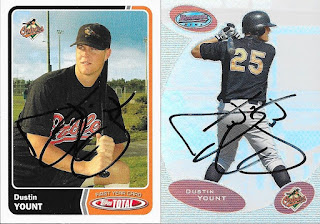 I keep checking to see if Yount is signing TTM because I have the above Bowman's Best, but now I can let that rest since I have this one.  It is a really cool card, though.  I think I will keep the other with my O's stuff and not worry about getting him TTM anymore. 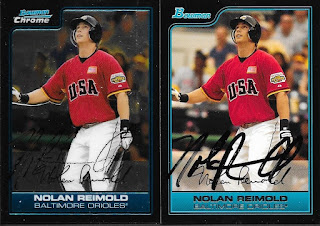 I had to pick up Zach's Reimolds that he offered.  They had to come here and be with the rest of my Nolan collection.  I did get a third Nolan auto out of the deal, but I sent it to my friend, Max, since he asked me politely if I would part with a Nolan for him.  Max has heard me talk about Nolan so much, he wanted to add him to his collection. 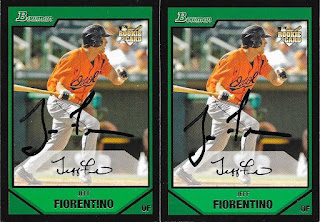 The last former O's "prospect" in the bunch was Jeff Fiorentino.  Fun fact, Fiorentino's nickname was Screech.  Apparently it was because he looked like the Saved by the Bell character and was in no way given the name by his grandfather because he sounded like a screech owl.  Or so I'm told.  Maybe people wouldn't sound like that if their brother would quit antagonizing them on the way to church.  Just saying.

Anyway, I really enjoyed the deal with Zach.  I actually have decided to jump into the "graphing" game.  I constructed a graphing book to take with me to Wood Ducks games this season.  I am way late to the game, but I have enjoyed adding different cards to my album so much, I thought I would continue to parlay that into a new venture.  We will see how it goes.
Posted by William Regenthal at 9:49 PM