TTM Success From The Spaceman 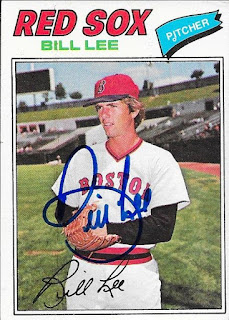 I added two really cool cards when I got this return from Bill "Spaceman" Lee.  I have actually already discussed him three times on this blog (here, here and here).  There isn't much more I can add about him, other than he is always an interesting interview.  I was hoping he would answer some of the questions I sent, but he just returned the cards signed.

I think this 1977 Topps is a nice one, since it shows him in a Red Sox jersey. 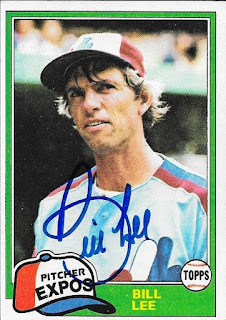 This 1981 is really nice, as well.  That set is slowly moving up the ranks as one I have a bunch of signed cards from.  I doubt it will unseat 1987, but you never know.  Lee's stats are recited in this post, in case you were interested again.

I mailed to Lee on January 5 and got the cards back on February 25, for a 51-day TAT.
Posted by William Regenthal at 7:40 AM