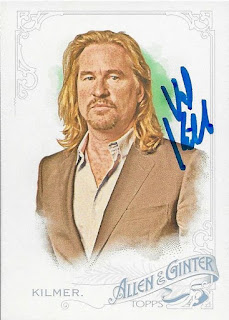 I haven't ventured out into getting TTM autographs from actors and actresses much.  I sent off to two of them and wasn't very lucky, one died and one never returned my mailer.  Still, I saw that some folks were having success from Val Kilmer, so I figured I would send out this 2015 Allen and Ginter and see what happened.

Kilmer has been in some of my favorite movies.  Tombstone is probably his best work, I think.  I have no idea how he didn't get a Best Supporting Actor nomination for his role as Doc Holliday in 1993.  Tommy Lee Jones took home the Academy Award that year for the Fugitive, but if you compare those roles side by side, well, Kilmer should have won.  If I had to make a top 10 list of my favorite movie characters of all time, Doc Holliday would definitely be in the top 5 or so.

Another film that he is in that I love is Kiss Kiss Bang Bang.  I don't know too many people who have seen it, so whenever someone comes over who wants to watch a movie, that's one of two that I pick (Suicide Kings is the other, but we are talking about Val Kilmer, here).  If you haven't seen Kiss Kiss Bang Bang, you really should check it out!

Kilmer has been in the news lately with some health concerns.  He denies that he had throat cancer, but other actors are saying that he has been battling it.  I've also heard that there is a possibility that he has a ghost signer.  Still, even then, I enjoyed sending this card out and having a chance to talk movies for a change.  Hope you guys liked it as well.