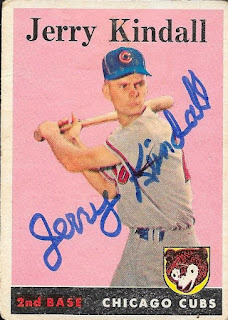 Here is another card that I picked up at the Raleigh card show in February that ended up being mailed out for a signature.  This is a 1958 Topps card of former Cub, Jerry Kindall.  I actually had bought two of them in order to have an even amount of cards to buy from the vendor at the show.  Kindall signed the second one as well, and it was sent along to my good friend, Max.

I mailed to Kindall on February 13 and got the cards back on February 27, for a 14-day TAT.
Posted by William Regenthal at 5:56 PM