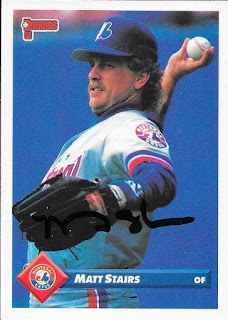 I waited a long time to send to Matt Stairs.  His cards were in my TTM box for a long time until I finally was able to send to Phillies Spring Training.  I'm glad I finally was able to, though, because the cards I sent turned out great.  This 1993 Donruss was a really cool card to send, I think.  I don't have very many 1993 Donruss as it is, so adding this one to the album will be nice. 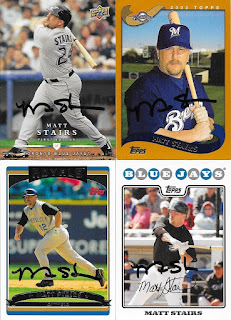 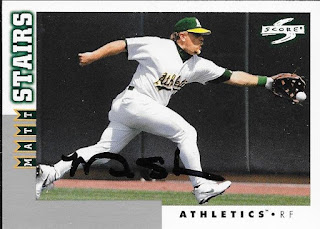 Stairs finished 17th in the 1999 AL MVP voting, his only time receiving votes.  He won the World Series in 2008 with the Phillies and now is on their coaching staff.  He appeared on the 2017 Hall of Fame ballot, but did not receive any votes.

I mailed to Stairs on February 9 and got the cards back on February 24, for a 15-day TAT.
Posted by William Regenthal at 10:55 PM