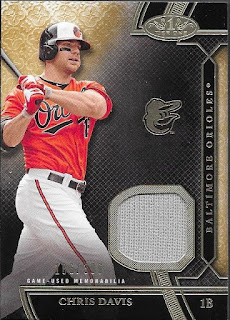 I got this 2015 Topps Tier One Chris Davis relic from my buddy, Nate, who I have been chatting with for a few months, now.  He is a really nice guy from Pennsylvania who I met when he sent me a random DM about a box break that he was hosting.  I rarely buy into box breaks, but I decided to join, then he and I hit it off.

Nate surprised me with this nice Davis card for the PC.  I wasn't expecting him to spend any money on me, but when he did, it was much appreciated.  The card is numbered 186/399.

Thanks so much for the Christmas gift, Nate!
Posted by William Regenthal at 10:53 PM