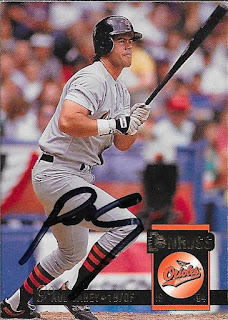 This was a really cool random Orioles card that was in a box of cards that Mom gave me a while ago.  I was sifting through the cards in the box when I saw this Paul Carey card.  I couldn't remember his time with the Orioles at all, so I looked him up.  I also looked up whether or not he signed TTM and saw that he did.  I was really happy, because it is a pretty nice card.  1994 Donruss is a pretty underrated set.  I also like the card because of the socks that Carey is wearing.  Looks like something Adam Jones would be wearing.

Carey (b. 1968) only played one season in the Majors.  How he got there is a bit more interesting.  Carey was drafted in the 4th round of the 1990 Amateur Draft by the Miami Miracle.  The Miracle were a team that played in the Florida State league as an independent.  That meant that they had no major league team supplying players to their club.  Attendance sagged for the club and they relocated to Pompano Beach, Florida for the 1990 season and were allowed to participate in the 1990 Draft starting with the 4th round.  They used their first pick on Carey, who was an All American at Stanford.  Another notable pick by the Miracle that year was former infielder Mike Lansing.  Carey was purchased by the Orioles from the Miracle in March of 1991.  He would appear in 18 games for the Orioles in 1993 where he collected 10 hits, had no home runs and had a .213 batting average.

I mailed to Carey on November 8 and got the card back on February 16, for a 100-day TAT.
Posted by William Regenthal at 5:30 PM