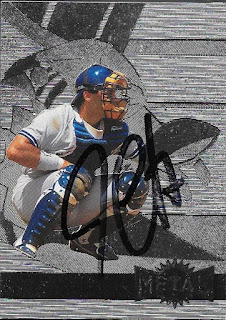 Here's a really cool TTM success that I got on some late 90s cards of Jim Leyritz.  The above 1996 Fleer Metal is a really cool card, not quite as cool as the 1997 versions, but it is still a nice card nonetheless. 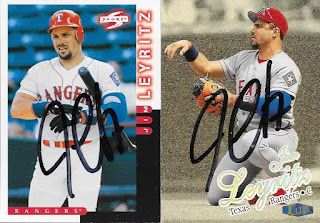 I was really happy to get the 1998 Score (left) since it came out of one of the bulk boxes Mom found for me.  The (right) 1998 Fleer Ultra Gold Medallion turned out really nice, as well. 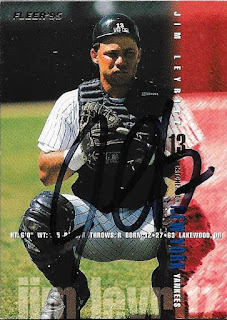 Finally, here is a 1995 Fleer.  I spoke about this set a few posts ago, but it bears repeating.  This is one of the craziest set designs that is around.  However, they all look really cool when signed.  I'd seriously consider buying a box of 1995 Fleer and adding more of them to the autograph album.