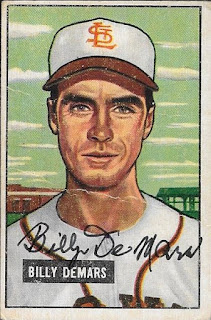 I've done a lot of checking lately on older players who sign TTM and found some that have cards in some pretty old Bowman sets.  I also have been working on trying to get some Orioles on as many older years of Topps and Bowman as I can.  Since their (the Orioles) first cards showed up in 1954, I have to find St. Louis Browns in older sets.  It is getting tougher and tougher to find living St. Louis Browns, so it is critical that if I want to get this stuff signed, I need to get it done ASAP.  So, I picked up this 1951 Bowman Billy DeMars card and sent it off for signature.  The card came out great, I think.  I love the old Browns hat and jersey, and DeMars has a nice signature.

I mailed to DeMars on February 10 and got the card back on February 17, for a 7-day TAT.
Posted by William Regenthal at 1:22 PM