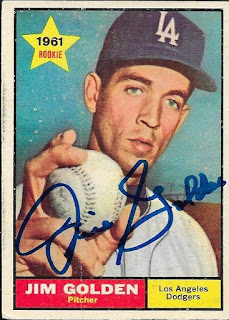 Here is the 1961 Topps that I picked up that I most wanted to see come back signed.  It is Jim Golden with a really cool shot of him holding up a baseball.  The card turned out great, so I am glad I sent it off.  One of the things I really enjoy about doing the TTMs is that I have been able to discover some really cool cards that I normally wouldn't have noticed before.

Golden was traded for two Hall of Famers in his career.  In 1958, he (along with Rip Repulski and Gene Snyder) was sent to the Dodgers from the Phillies for Sparky Anderson.  Later, in 1963, he and Danny Murphy were traded from the Colt .45s to the White Sox for Nellie Fox.

I mailed to Golden on January 16 and got the card back on February 6, for a 21-day TAT.
Posted by William Regenthal at 9:47 PM