Some (Not So) Recent Chris Davis Pickups 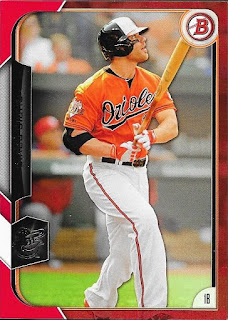 I have gotten quite a few Chris Davis cards recently in trades and Ebay, but I have been so busy trying to catch up on TTM posts.  All of these have been logged on my Davis spreadsheet, so it is pretty up to date, as far as I know.

Here is another 2015 Bowman red parallel numbered to 5.  I now have two of them, out of the 5.  This one is numbered 2/5.  I have a saved search on Ebay for Chris Davis Red and Chris Davis numbered to 5, so I'm hoping to see some more pop up. 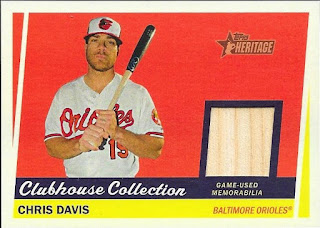 I picked up this 2016 Topps Heritage High Number relic of Davis from my friend, Blaine.  He wanted a Manny Machado RC for it, and I had several, so we made a quick and easy deal for it. 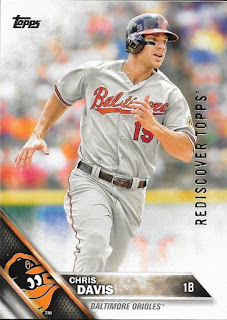 I picked this up from Ebay.  This is one of the 2017 Topps Rediscover Topps buybacks, but for some reason they bought back a 2016 Topps and slapped their Rediscover Topps stamp on it.  Kind of weird.  I got it for $0.99 on EBay, and it will work as a "rainbow" card, I guess. 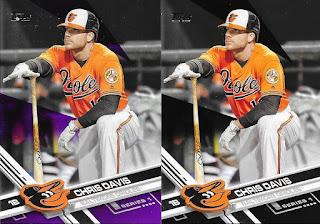 Speaking of rainbows, here are two 2017 Topps parallels of Davis that I picked up once Series 1 came out.  The black parallel is numbered 56/66, and the purple is not numbered. 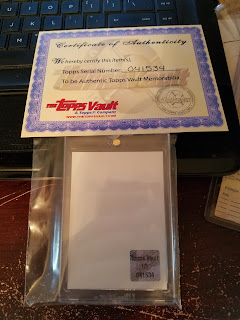 Finally, here is the 2017 Topps Vault blank back 1/1 that I picked up recently.  I got it for less than $15, and it came in the magnetic case, along with the certificate.  I thought the blank backs were kind of dumb, really, but since I have Chris Davis 1/1 saved as an Ebay search, it popped up.  Actually, the Heritage 1/1 blank back showed up as well, and I picked it up recently, too.  It is on the way, and will be shown in a (much) later post.
Posted by William Regenthal at 5:11 PM