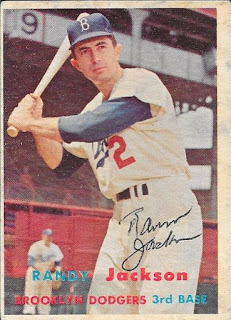 It may not be a samurai sword, but I can now add Randy Jackson's autograph to my album.  Oh, that's a different Randy Jackson.  Anyway, I added another 1957 Topps to the album with this success from a former Brooklyn Dodger.

I mailed to Jackson on February 13 and got the card back on February 28, for a 15-day TAT.
Posted by William Regenthal at 12:21 PM