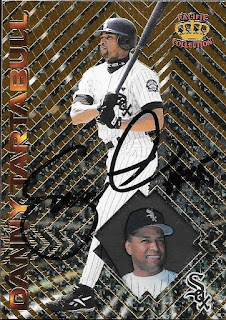 This TTM success may have had some of the coolest cards come back that I have sent out so far.  I had a ton of Danny Tartabull's cards, and had a really tough time narrowing down the last few cards I selected.  This first couple of cards I added to the envelope were no-brainers, like this 1997 Pacific Prisms.  This is just a cool card.  It has a little clear plastic window at the bottom with Tartabull's face, and an overall cool looking design.  I had a couple cards of guys from this set that I had sent out, and Tartabull is the first one to have come back.  I'm really glad it did, because this is going to look so cool in my album.  There are a couple other Pacific sets I've seen that I really want to score some TTMs with, but I need to find some of guys who are signing. 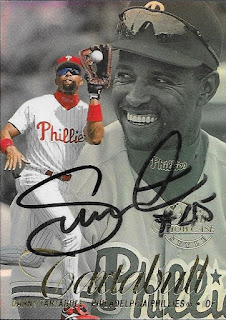 This is a 1997 Flair Showcase.  Unlike the Pacific above, I have a couple of these signed already.  They all turn out great, even though the scan doesn't do the beauty of the card any justice.  In person, it looks awesome. 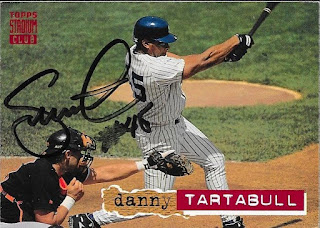 This 1994 Stadium Club had potential to be a really cool success, but the auto is a bit smeared.  I don't let that bother me all that much.  The card itself has a really cool photo, and I always liked this design.  That is also a lot of grass on this card.  I think it frames the photo nicely.  I wouldn't be opposed to a card set having a "grass" border, much like 1962 and 87 Topps have the wood borders. 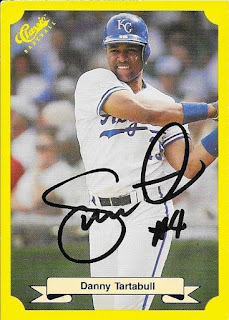 Finally, here is an oddball Classic card I found at my LCS along with the Flair Showcase and Pacific Prism.  This card's yellow border really scans well.  This is a 1987 Classic.  The back only has Tartabull's high school stats from 1980 for some reason.

I mailed to Tartabull on November 18 and got the cards back on February 24, for a 98-day TAT.
Posted by William Regenthal at 11:15 AM