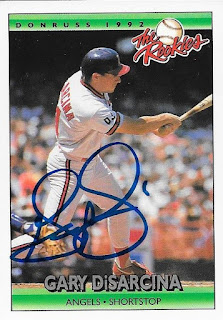 Whenever I got back to my parents' house, Mom usually has boxes of cards that she has found while cleaning that date back to when I collected as a kid.  Recently, she handed me a pack of 1992 Donruss The Rookies and inside was this Gary DiSarcina (among other cards, of course).  I checked each of the cards to see if any of the players signed TTM, and here we are.  I always liked Donruss, and thought it was cool when they did the different color sets like Rookies or Update. 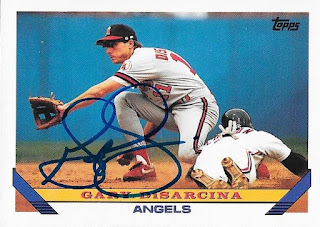 I mailed to DiSarcina on February 9 at Red Sox Spring Training and got the cards back on February 24, for a 15-day TAT.
Posted by William Regenthal at 11:31 AM