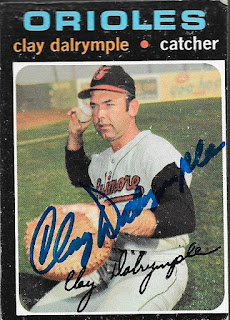 I was able to add another vintage Oriole to the binder with this success from Clay Dalrymple.  The 1971 Orioles card was actually a toss-in after a search through my Orioles box just before I sent off to him.  I was set on three cards to send, and since Dalrymple charges for his signature, I was going to hold at that amount.  Thankfully, I found this Orioles card and included it for an additional $5. 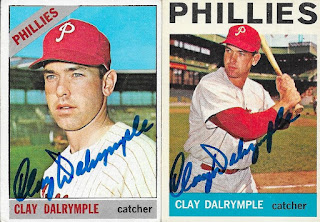 These two cards were in my vintage box.  I found them after I decided that I wanted to mail to Dalrymple.  The 1964 is a really nice card.  Not that the 66 isn't but there is something about a 1964 Topps that I really like. 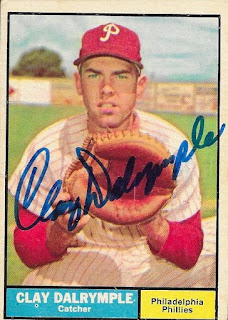 The card that started me on trying to get Dalrymple was this 1961 Topps that I picked up back in January from the Columbia antique shop.  It is one of the last ones that was sent out and received, and turned out really nice.