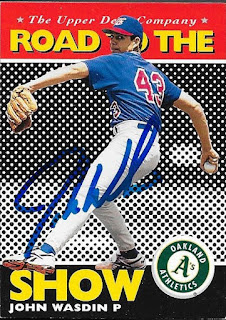 I added some cards with this TTM success that I don't really recall opening, mainly because they came out when I was out of collecting.  Luckily, there are a few boxes of cards at the shop that have a bunch of various cards and sets from that time period.  I have searched those boxes a bunch of times, and have come away with a bunch of potential TTM subjects that I think will look cool in my album.

The above 1994 UD Minors John Wasdin was the highlight of this TTM success.  The card is just really cool-looking, and pops nicely in the scan. 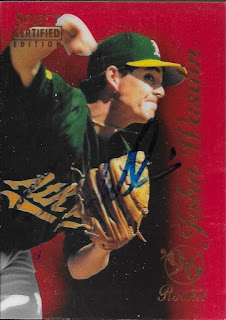 This 1996 Score Certified really could have been the highlight of the TTM success, but not even baby powdering this card could help the signature stay better.  The card is made of a pretty slick foil, and looks a lot better in person. 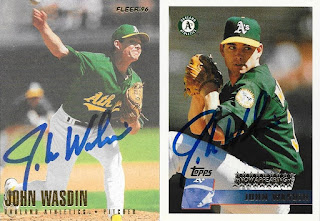 These two are pretty basic cards.  I got the 1996 Fleer out of my box break with my son, Chris.  The 1996 Topps was floating around some of my boxes.  I have very few 1996 Topps, so any one of them that I can get back signed, I have been sending out.  I need to find some more, but at the moment, I don't have many options. 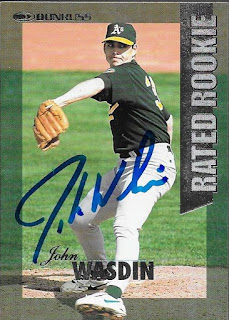 Finally, I really liked the look of this 1996 Donruss.  This was the year when I got out of cards for a while, and I have very little 1996 anything.  I don't think I opened any 1996 Donruss, so adding this to the album will be really nice.

I mailed to Wasdin at Orioles Spring Training on February 9 and got the cards back on February 27, for an 18-day TAT.
Posted by William Regenthal at 9:42 PM