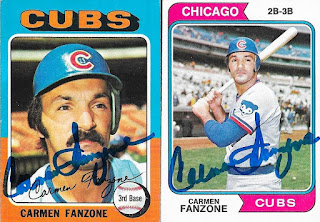 The first thing I have to say is that this guy must have a really cool name for his man cave at home.  Fanzone's Fan Zone?  Something like that?  This success from Carmen Fanzone was a pretty cool one.  I found both of these cards at my LCS in the vintage box and saw that he signed TTM.  When I got my return from him, he had sent it in his own postage paid envelope.  Inside among the signed cards was my self addressed stamped envelope!  He paid his own postage and sent mine back unused!  He also included a little note thanking me for my interest in his career.

I mailed to Fanzone on February 13 and got the cards back on February 28, for a 15-day TAT.
Posted by William Regenthal at 11:28 PM