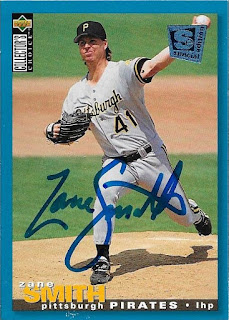 There are a lot of things I like about guys who sign huge lots of cards.  One of them is that I get a nice variety in my return, and aother is that when I finally get around to posting the cards, my 'to be blogged' stack goes down more.

This TTM success from Zane Smith was a long time in the making.  I kept meaning to send to him, but other stuff kept getting put in front of his cards.  By the time I did send to him, I had a huge stack of cards to choose from because I kept pulling every card of hims that I saw.

This 1995 Collector's Choice SE is probably my favorite of the bunch.  The blue borders are really nice, and paired with the Pirates yellow, the card is pretty sharp. 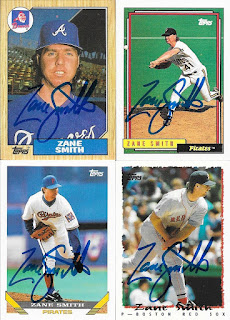 Here is the requisite assortment of Topps cards.  The bottom right is actually a 1995 Topps Rookies and Traded that I pulled out of a $1.00 pack I found at the Raleigh card show right before I mailed to Smith.  I had to add in the 1987, of course, and I included the 1992 and 1993 because I don't have many versions of those in the album compared to other Topps sets.  The 1995 beat out Smith's rookie card from 1986 since I had a bunch of that set signed already by other players. 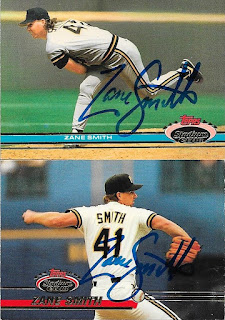 Finally, here are two horizontal Smiths from 1991 and 1993 Stadium Club to round out the success.  When you want a nice signed card, Stadium Club is always a great choice.  Both of these turned out great.  Smith has a really nice signature, and these two really showcase it.

I mailed to Smith on February 20 and got the cards back on February 27, for a 7-day TAT.
Posted by William Regenthal at 10:13 PM