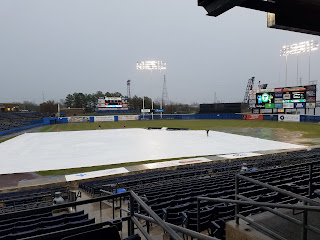 With weeks of preparation, a day off from work and a 2.5 hour drive to Norfolk, I had hoped that I would rack some autographs.  I braved the rain this morning and waited outside Harbor Park to see if I could "graph" the Orioles or Tides pre-game.  I wasn't successful at all.  It rained the whole time I was outside the park, and when the players got off of the charter buses, they went inside without stopping.  I did have company the whole time, though.  I met an older fellow named Joe, a fellow grapher, and very talkative guy.  It helped to pass the time as we waited patiently for folks to arrive and/or the weather to slack off.

I got to the park just after 10:00AM and they allowed us in just after 1:00.  It was still raining pretty hard when I got in the park (see the pools of water in the above photo?).  I was starving, so I went ahead and got lunch while I waited for the rain to stop and head to my seat. 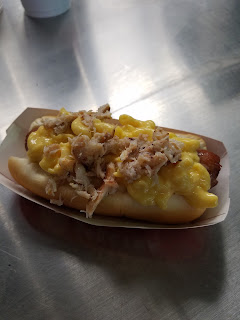 I bought an "Oriole Dog" that consisted of a jumbo all-beef hot dog, mac n cheese and crab meat.  I don't normally go for odd dogs; usually just chili, slaw, ketchup and mustard, but I figured I would try something new.  I'm glad I did!  This was a really amazing hot dog, and I would get another one! 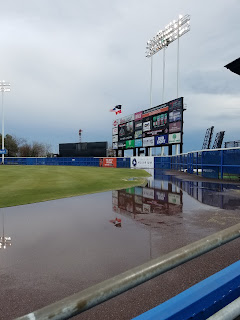 The rain let up, and I made my way to my seats.  I had two seats, but my good friend, Ryan, was unable to make the trip.  It is a shame that he couldn't make it, because the rain did clear out, and a game was played. 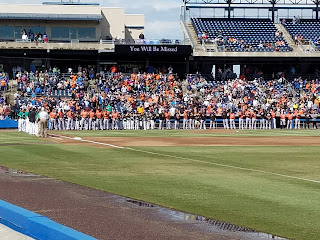 This was the last game on the exhibition schedule; before a couple real games on Sunday and the rest of Opening Day on Monday. 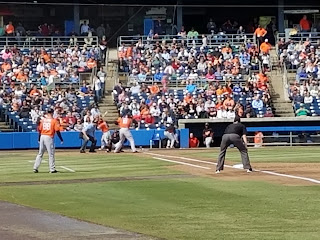 I got to see all of the Orioles stars (at bat is Chris Davis), and a home run by J. J. Hardy.  THe game ended in a tie,  3-3.  They stopped the game at the conclusion of the 9th inning due to more bad weather that was on the way. 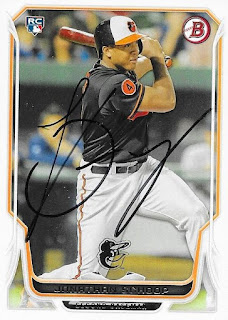 I waited outside the clubhouse entrance with a bunch of other people, and my weeks of preparation for autographing finally bore fruit.  I got ONE card signed!  I had a chance to get a few others (Davis, Buck, Adam Jones), but I wasn't fast enough locating their pages in my new graphing book (despite it being in alphabetical order), and getting my Sharpie out.  I learned that "graphing" is best when you have a partner to help you hold things, get pens out, get cards ready, etc.  However, I did get this 2014 Bowman RC signed by Jonathan Schoop.  I would call this a success, for sure.  I actually thought I had gotten a 2015 Bowman signed, which would have been ok, too, but I do love 2014 Bowman, and this is his RC.

So, there you have it, my first real attempt at "graphing" a team.  It wasn't a failure by any stretch.  I had a blast.  The weather sucked pre and post-game, but it was beautiful during the game.  I had a nice long chat with the guy beside me, and laughed a lot at the drunk folks behind me heckling the players from both sides.

I plan on "graphing" a lot more, especially since Kinston finally has a team again.  I think by next season, I will have this whole thing worked out to a science, much like my TTMs.  In the meantime, I will enjoy my ONE Schoop auto.
Posted by William Regenthal at 10:56 PM