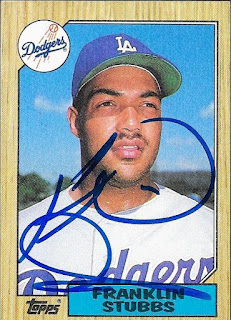 My incoming TTMs have slowed down tremendously.  I have a ton out there pending return, they just haven't come in as steadily, for whatever reason,  That has helped me knock my stack down some, but there still are a lot more to post.  Taking care of this TTM success from Franklin Stubbs does help, though, since he signed a ton of cards.

I got another 1987 Topps out of the return.  I never get tired of seeing these come in.  There was once a time where I was trying to put my huge 1987 box off on anyone who would take it.  Now, I have really enjoyed getting these signed.  I don't think I will ever pursue anything close to a set, but it is kind of fun to see what all I can get signed from it. 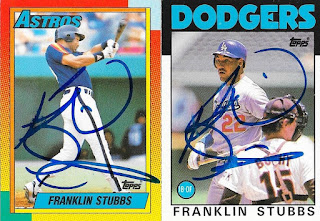 Lost in some of my posts is my admiration for Topps Traded cards.  Starting in the mid 80s, they used a different card stock, and the fronts of the cards seem smoother (but not over-glossed or anything) than a typical Topps Base.  I feel like it helps the colors stand out more on some of them, and the autographs definitely stand out.  Maybe that's just me. 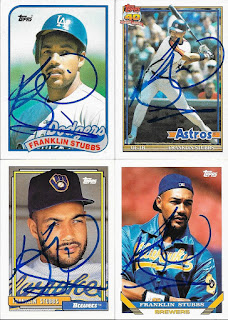