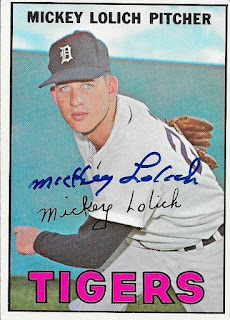 Its always good when I can add a big name to my TTM successes, and Mickey Lolich is a pretty good one.  I also was able to get him on a 1967 Topps, of which I don't have many signed.  The card turned out really nice, I think.

Lolich signs for a fee of $20/card, so I could only afford to send one to be signed, even though I had a couple cards to choose from.  In the end, the '67 was chosen because I thought it looked the best, and it had been a while since I had a '67 added to the autograph album.

I mailed to Lolich on February 28 and got the card back, along with a signed price list and signed note on March 23, for a 23-day TAT.
Posted by William Regenthal at 10:37 AM