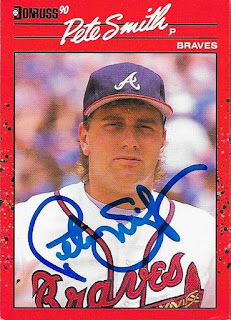 I personally think the 1990 Donruss design is historically underrated.  This was the first set I put together (it was so easy), and one of the first types of cards I remember buying in stores.  I had to make sure I had some of them in my autograph album, so when I got this success from Pete Smith, I was glad to see that he signed my 1990 Donruss that I had included.  By the way, 2017 Donruss is based on the 1990 design, and those cards look so great, as well. 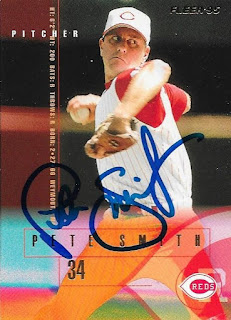 I also got a 1995 Fleer, because you can never have enough from that crazy set.  They really do turn out nice when signed, though. 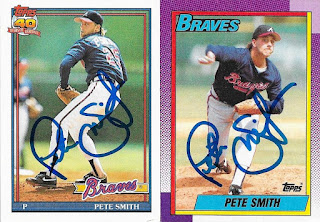 Finally, here are the two Topps offerings I sent along, a 1991 and a 1990.  Those two years are way behind on my tally for late 80s, early 90s Topps sets, so I try to include them over other years when I can.