A TTM Success From Billy O'Dell and a Trade 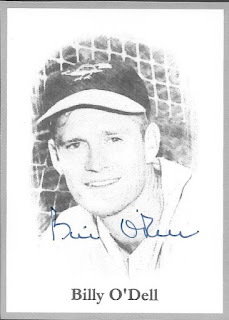 I had already gotten Billy O'Dell via TTM a while back on a ball.  It was actually in 2012 while I was away at the National.  You can read that post and his stats here.

My purpose of sending to O'Dell a second time was because he is the only Oriole left in the 1955 Topps set that still signs TTM.  So, since I wanted to make sure I had an Oriole from each Topps set, I sent out a 1955 Topps for him to sign.

When I got my return, there were these two really nice signed post cards, but no 1955 Topps anywhere in the envelope. 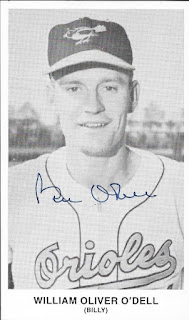 I'm not sure what happened with the card, but I was happy to get something back.  The post cards are really nice.  When I posted them on my Instagram, a fellow Orioles collector commented that he had an extra 1955 Topps signed by O'Dell and was wondering if I could trade him something in return. 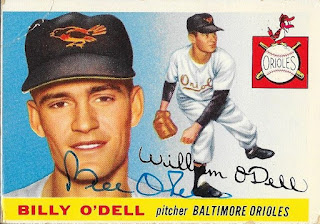 So, we worked out a deal that had me send him an Anthony Santander signed post card from Fan Fest and he would send me the O'Dell signed '55.  In the end, we are both happy and we both got what we wanted.