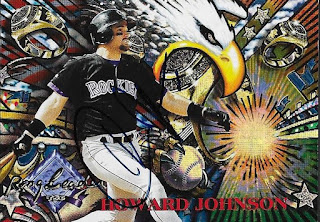 While Chris was out of town for Easter break, my wife and I were able to catch a game at Historic Grainger Stadium on Thursday, April 20.  Before the game, my wife and I did a little graphing.  I got Howard Johnson on two cards (one of which was a 50/50 for my buddy, Carson).  My wife actually got this 1995 Stadium Club Ring Leaders card signed for me (the auto is by his hip). 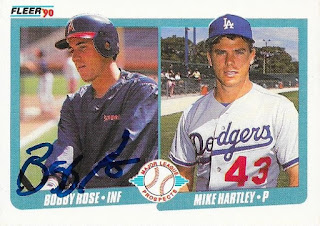 I also did some 50/50 graphing for my good friend, Max.  He sent me a few Bobby Rose cards, and I got them all signed, and split them with him. 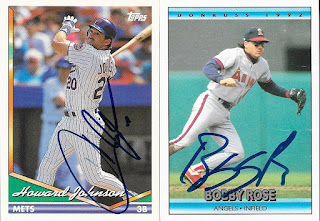 The Howard Johnson that I got signed for Carson was a 1987 Fleer, which looked really nice in blue Sharpie.  The Rose was another from Max.  I was also able to get the above 1994 Topps Howard Johnson signed.  I think I have gotten just about everything that I had of Johnson that I really wanted to get signed.  I think most of what I get after this will probably be gifts for friends and/or trade bait. 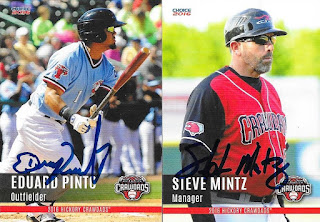 We were also able to get a few of the Hickory Crawdads team set cards signed.  A lot of the players in this set have moved up to the Wood Ducks this season.  Steve Mintz went to nearby Mount Olive College, and is now the Wood Ducks pitching coach.

The Wood Ducks lost the game, but we had to leave early, since my wife had to be up really early for work.  It was nice to go out and spend some time at a game with her, though.  I know the ballpark isn't her ideal spot, but we seem to enjoy going to games together.  Now that Chris is home, though, he and I will be doing some more graphing, I'm sure.
Posted by William Regenthal at 10:42 PM