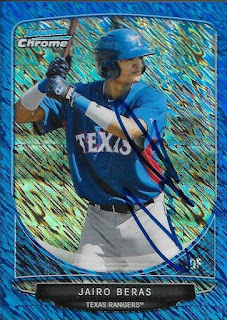 Last night, the Wood Ducks were supposed to play an exhibition game against Mount Olive University, but ominous clouds lingered well before the gates opened.  A storm was set to come through, but my son and I headed to Grainger Stadium anyway.  I had placed an order for some Wood Ducks cards last week on COMC, and they were set to come in yesterday.  Of course, when I got home after 5:00 from work, the mail lady was late, so I had to wait around until she came.  Luckily, she got here around 5:20.  Chris and I thrashed to get some baby powder on the chrome parallels, and head to the park.

We were able to get Jairo Beras on a few cards before it started raining.  The above 2013 Bowman Chrome blue shimmer mini turned out awesome.  It is numbered 196/250.  I love how it scanned.  I may seriously have to get some more of these shimmer parallels, because they really look great. 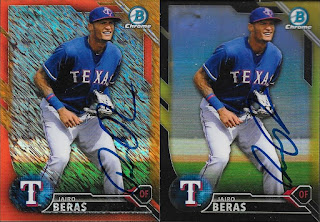 These two 2016 Bowman parallels look equally as nice.  Neither of these cards are numbered, but they look really nice. 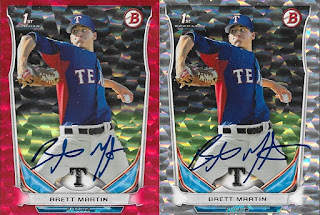 We waited out the rain after getting Beras by picking up some food and eating dinner underneath an overhang and chatting with one of the park employees (who happened to be an Orioles fan - woo hoo a new friend!!) and checking the MLB At Bat app to see how the O's were doing (walk off home run by Mark Trumbo really made my night!).  Finally, the rain let up and we made our way back to the field.

We watched Brett Martin throw for a bit, while the PA announcer let us know that the exhibition was canceled.  Martin came up to us and signed everything that Chris and I had. 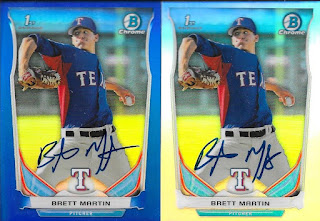 The best part about meeting Martin was that he remembered Chris's name from when we met him the night before.  He spoke with us for a while about how he liked Kinston and where he was from.  It turned out that he was a big racing fan and is into cars, so I plan on getting him a signed photo of my dad's drag car.  I think it would be really cool to hand it to him since he was so nice to us.  One phone call to my mom got this taken care of. 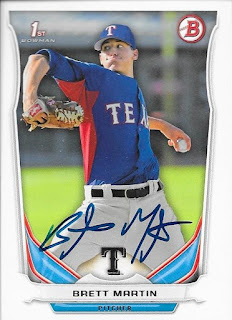 I'm excited, too, that Martin will be the Wood Ducks starter for their home opener.  I plan on cheering for him (and the other Wood Ducks, obviously) next week.  I am torn about whether or not I will be graphing the rest of the Wood Ducks cards that I have or do some Winston-Salem Dash cards that I picked up in the same COMC order.

Check back here often; I plan on posting a lot more items from the Wood Ducks and other minor league games.
Posted by William Regenthal at 6:35 AM