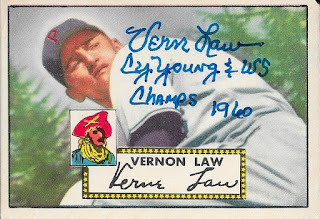 My mom asked me when I posted my card that Vance Law had his dad, Vern, sign, why I didn't post Vern Law's stats.  Well, I didn't post them because I had a plan to get Vern Law on his own.

I bought the above 1952 Topps off of Ebay, along with the below 1955 Bowman and 1961 Nu Card Scoops.  I wanted to add another 1952 to the autograph binder since I like 1952 Topps so much.  Law included some nice awesome inscriptions to the card, as well. 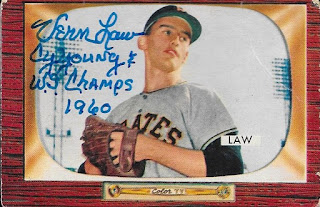 The 1955 Bowman received the same inscriptions as the 1952 Topps.  This is the card that really made me want to send to Law in the first place.  I passed on buying one at the February card show, but ended up getting this off of EBay instead. 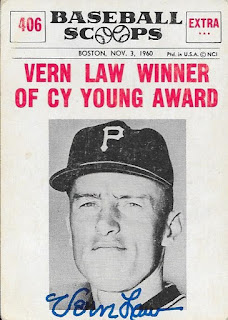 Finally, Law left the inscriptions off of the '61 Nu Card Scoops, I guess since it already pretty plainly says he won the Cy Young award.  I had been wanting to add a Scoops card to the binder for some time now, and finally have it.

Law appeared on the Hall of Fame ballot 7 times between 1973 and 1979, with his highest voting percentage being 2.4% in 1973.  Law is outspoken against his autograph showing up on EBay, so he charges a signing fee of $10/card.  I sent a check along with my request, so I didn't mind paying the fees.  I had gotten Law on a ball back in 2012, which you can read about here.