Another TTM Success From Bobby Brown 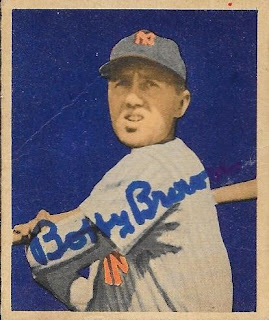 Again, I try to refrain as much as possible from sending multiple requests to former players for TTM, but there are occasions where I feel it is necessary to do so.  In the case of Bobby Brown, I wanted to make sure I had a 1949 Bowman represented in my album, and when I saw Brown's '49 Bowman, I jumped at the chance.

Take a look at that card.  It is really nice.  It is his rookie card, and I spent about $17 on it, but I am glad I did.  It will definitely look great in my album. 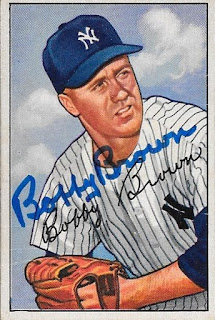 I also sent along this 1952 Bowman, which turned out really nice as well.  By my unofficial count, I have something from every vintage year of Bowman except 1948.  I haven't considered the refreshed Bowman from the 90s-present, although, I do have a bunch of cards from various years.  I may consider addind other years at some point, but for what I am doing here, I was trying to get one signed card from each year of Bowman from 1948 to 1955.

There aren't any players left in 1948 who sign TTM.  Red Schoendienst isn't really a sure thing with signing, so I will likely have to buy a signed '48 from somewhere.  If I only have to buy one year, then that isn't too bad.

I mailed to Brown on March 11 and got the cards back on March 20, for a 9-day TAT.  The 1949 Bowman is the oldest baseball card that I have been able to get signed on my own.
Posted by William Regenthal at 7:57 PM