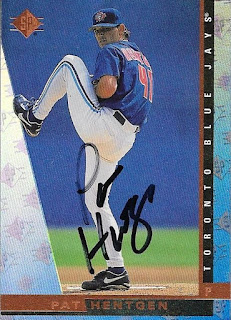 I waited a while for this one, but I finally got a return from former Oriole, Pat Hentgen.  There were quite a few failures listed for Hentgen, but I figured I would send to him anyway.  I sent two cards, this 1997 Upper Deck SP and a 2001 Topps, but the SP was the only card that he signed.